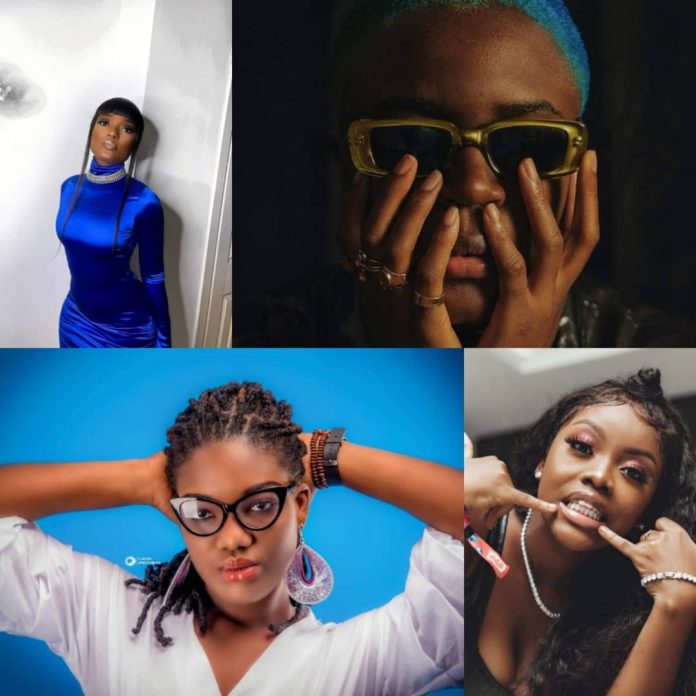 Over the years, female dominance in the Ghanaian music space was at intervals but in recent times females are dominating and going head to head with their fellow male counterparts which is a good sign for the female artists to thrive, Ebony reigns is a typical example.

The likes of Amaarae, Wiyala, Adina, Gyakie, Efya, Wendy shay, Eno Barony,iOna Reine, Ak songstress just to mention a few are the current female artists doing so well with their music and projecting the name “Ghana” to the outside world, this is a thorough analysis based research made by the team of Youngprs.com.

Ama Serwah Genfi popularly known as Amaarae, is a Ghanaian singer, songwriter, producer, and engineer known for her work around representation of gender and race in music. Amaarae is noted to have dominance over R&B, Afro-fusion, Soul.

In 2020 Amaarae released the song “Sad Girlz Luv Money” featuring Moliy on her debut album The Angel You Don’t Know. In 2021 the song was remixed with a feature from Kali Uchis which then went on to become a viral hit on social media and streaming platforms, charting globally.

Noella Wiyaala known under the stage name Wiyaala, is a Ghanaian Afro-pop singer-songwriter who sings in her native language Sissala and Waala dialects and English, often combining all three languages in her songs. She attained public recognition with her single “Make Me Dance”.

After making her name in reality shows in Accra, she established a solo career in 2013 with the hit single “Rock My Body”, which won her two awards at the 2014 first edition of the All Africa Music Awards, the Most Promising Artiste in Africa and Revelation of The African Continent.

Adina Thembi Ndamse better known by her stage name Adina is a Ghanaian-South African singer and songwriter. She was the winner of music reality show Stars of the Future in 2008. Her eighth music single titled “Too Late” won her two awards – Record of the Year and Best Female Vocalist of the Year at the 2018 Vodafone Ghana Music Awards in Ghana. In March 2021, she was among the Top 30 Most Influential Women in Music by the 3Music Awards Women’s Brunch. Adina has worked with a whole lot of artists in Ghana from the likes of Sarkodie, TeePhlow, Okyeame Kwame, Rechie Mensah Akwaboah, King promise etc.

Jackline Acheampong known professionally as Gyakie is a Ghanaian afrobeat/afro singer. In 2019, Gyakie released her first single titled; “Love is Pretty” which paved way for another single, “Never Like This.” In August 2020, the “Forever” song from her five-track EP, titled “Seed” was her claim to fame enjoying airplay and leading charts in Ghana, Kenya and Nigeria.

Jane Awindor better known by her stage name Efya, is a Ghanaian singer, songwriter. She is the daughter of Nana Adwoa Awindor, a filmmaker and celebrity host of the late television show Greetings From Abroad. Efya got her first exposure to fame when she participated in the maiden edition of the Stars of the Future talent show. She won the Best Female Vocal Performance category at the Ghana Music Awards in four succession, beginning in 2011.

Moreover, she was applauded for her performance at the 2013 Africa Magic Viewers Choice Awards.

Wendy Asiamah Addo (born 20 February 1996), known by the stage name Wendy Shay, is a Ghanaian Afropop and Afrobeats singer. In March 2021, she was among the Top 30 Most Influential Women in Music by the 3Music Awards Women’s Brunch.

Wendy shay have had a lot of hits songs to her credit and has dominated the scene ever since she stepped her foot into the scene. There has been a lot of controversies especially with regards to her being Ebony’s successor but above everything, she’s doing so well entertaining fans.

Ruth Eno Adjoa Amankwah Nyame Adom (born 30 October 1995), known professionally by her stage name Eno Barony, is a Ghanaian rapper and songwriter. Born in Tema, Accra, she released her debut single, “Wats Ma Name” and also “Tonga”, the remix of the track “Tonga” by Joey B ft Sarkodie in 2014 that lifted her into the limelight. It was claimed she was the first female rapper to hit a million views on YouTube.

Mercy Onuawonto Sam, popularly known as iOna Reine, is a Ghanaian singer, song writer and a performer. iOna is a professional midwife but has managed to make a name for herself in music. She started music professionally in 2019 and has ever since announced her presence with some hit songs to her credit. The Ghana Music Awards USA nominee aspires to break international boundaries with her music as she shares positivity with the world. IOna Reine is currently having a hot single dubbed Gyaime which is doing well on digital platforms and receiving radio airplay.

Akosua Kwakye, AK Songstress is a young talented dancehall artiste from the Ashanti Region of Ghana.

AK songstress realized her passion for acting and music at a very tender age. She took part in several singing activities in school. After her senior high education, she decided to go pro with her singing and has been signed on by Paradise Entertainment the original name behind 4×4 and VIP.

She has currently released twenty- four singles which are enjoying massive airplay and shot nine videos in Ghana and South Africa.

She was groomed by management-Paradise Entertainment.

Ak Songstress is the first female to ever win the ‘Discovery of the Year for Dancehall/Reggae Artiste’ at the 2014 BASS Awards in the midst of male contenders. She also won the maiden edition of “SUPERSTARS REALITY SHOW” with her song “HOLIDAY” adjudged as the most popular song of the competition. Currently her song “Jonathan” has crossed boundaries and is receiving much airplay in Ghana and outside Ghana.

The above mentioned list of female artists have over the years shown dominance and have proven to be talented in what they do. They can equally face any female African artist squarely without any doubt.