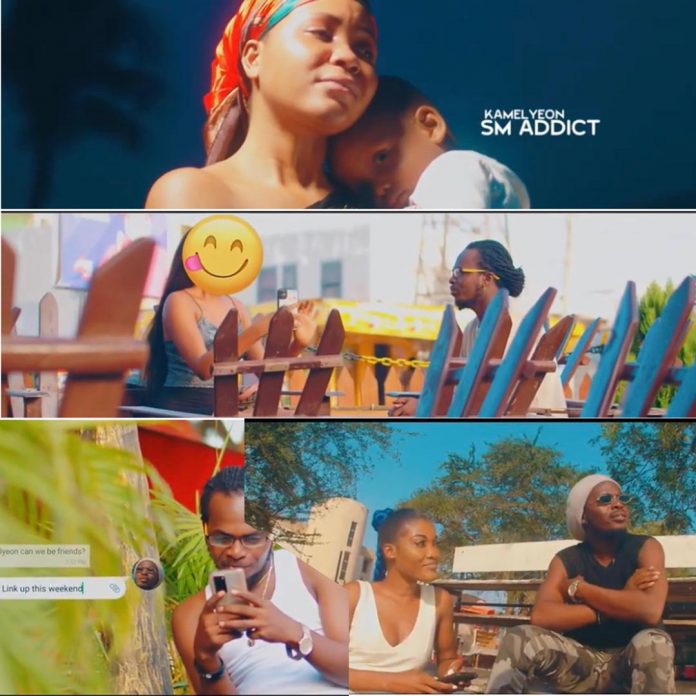 Social Media has become an integral part of us that it’s so difficult as a youth not to patronize it. As helpful as it is, it is similarly addictive too. Many youths have become so obsessed with it that it is creating problems for them than the useful benefits that come with it.

Kamelyeon recounts this narrative in a very fine song he titles “SM Addict”, which otherwise means “Social Media Addict”. Not to crucify anyone for their (heavy) use of social media, the buzzing Ghanaian Reggae/Dancehall crooner signed to 16th August 85 Villa record label gives a vivid description of the ill side of social media that has plunged many young ladies into chaos.

He drops a video to this song directed by SNARES — the music video even gives more detailed meaning to the song as it presents the perfect scenarios Kamelyeon was singing about.

“SM Addict” is the second soundtrack on Kamelyeon’s 6-tracked EP titled “Rainbow”. The song off the catalogue was produced by Brainy Beatz on his Mood Swings Riddim. The song is a lead jam from the EP gaining more and more airplay across. It’s a strictly one drop (Reggae) ‘old skuul’ style song.

The entire EP which was released on Friday, November 13, 2020 featured nobody. Kamelyeon did all by himself and even mixed and mastered 5 songs on it. He has over 75,000 streams for the EP across digital platforms.