He might be on the threshold of establishing himself as the don of the highlife circle in the next few years but unlike many performers of that genre of music, who have adopted the see no evil, speak no evil and hear no evil attitude Obiba Sly Collins has made his voice heard on national issues. He has consistently called for peace and unity in election years and admonished the youth against adopting sakawa as a genuine money making way of life. In short while other musicians keep quiet over national affairs, Sly Collins makes his voice heard and always on the side of reason and wisdom.

Thus Collins has veered off the beaten track and used his music down the years to educate the citizens politically and this he has continued in this new single he titled Mabre (I am tired).

Obviously, the highlife musician is at his wit’s end seeing the way the political class has twisted and manipulated the citizenry into believing that they alone have the solution to the socio-economic quagmire the nation has been enveloped in. This he warns has placed the future of this nation and along with it the destiny of the upcoming generation in jeorpardy.

Therefore in singing this song, the multi-instrumentalist Collins, along with his side kick Agbeshie who calls himself Mr. Ewe wailed out their hearts to express their frustration at the sad heart-wrenching events that have enveloped this country.

In Mabre, the duo expressed their revulsion at the level of deceit and chicanery being perpetrated against the citizenry by the political manipulators.

‘I am tired of the political deceit, family deceit and deceit by friends’, he intoned asking: ‘why can’t we turn a blind eye to the political coloration and come back to build a nation that will truly be what we want our country to be, a country built for Ghanaians.

‘The pull him down spirit has become a problem bedeviling our nation in particular and the continent in general. My prayer is that God will touch the heart of our politicians to think of a successful Ghana and Africa.’

Continuing, the singer expressed his unease at the political class who have become sycophants and in doing so has stultify the creative abilities of the people adding that the philosophy which makes one to discriminate against another because he is not from my political grouping as unfortunate.

Always the philosopher and a patriot, he discounted the tendency of people to flock around the rich whose actions and activities are applauded and lauded by the deprived citizenry whether those actions inure to the general benefit of the population or not.

Sly Collins’ admonitions are also extended to the religious sects who in their bid to further milk the poor citizens are expounding some new- fangled doctrines and interpretations of the Holy Bible to suit their evil minds instead of the truth which admonishes us to be truthful to ourselves and build a nation with love.

Though the musician has distinguished himself as a highlife musician who sometimes experiments with reggae, Obiba this time went singing a fully fast paced highlife tune which with his melodies coupled with Agbeshie’s Ewe raps has given the music a new direction which one is bold to say will in the coming months be sampled by other musicians who want to remain relevant in the highlife kingdom.

This self-produced single, we are bold to say will in the coming months serve as a reference point in the nation’s political discourse.

I Am Feeling Sorry For My Sister Fantana - Euni Melo 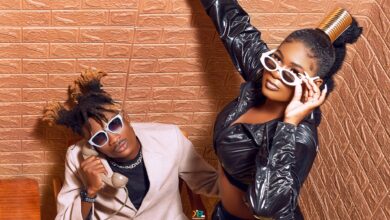