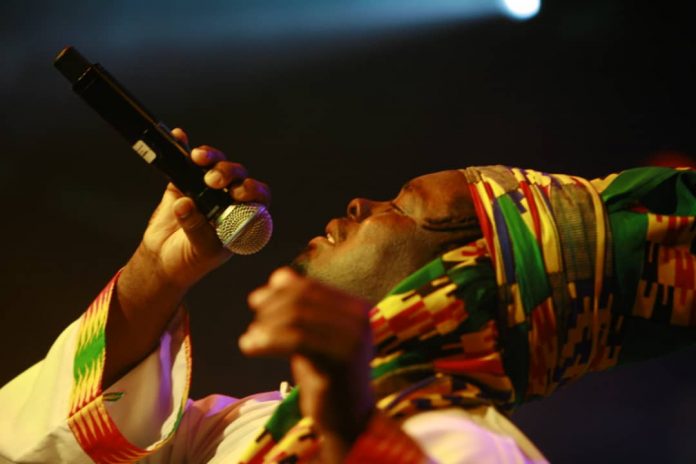 Yep! “Tha Dawn” was a loud global hurray for all pioneer generation fans that got stuck to Shasha Marley’s stagnant discography during his long absence of ten years, and it came out as a timely sudden solemn sound-quake to strengthen the awaken amidst the era’s pandemic scare, but it seems Shasha made a silent promise to stay release-prolific with fast multiple post-break singles — he just pumped out “Enemies Are Not Jah” even while “Tha Dawn” is still blazing WILD.

At an instance of lyrical correlation, “Enemies Are Not Jah” fits in as a direct sequel to “Tha Dawn”. Both being up-to-the-era pieces with resolute root messages that only come from a freedom-seeking soul’s deep. The inference then is Shasha Marley’s comeback is a continued mission of mass spiritual liberation and deepened consciousness for his kindred, working on from where he left off.

“Tell Freedom”, Shasha Marley’s debut album (released in 2000) shot him straight up to the top spot of African reggae greats. The album’s timeless punch was still busting radio, home and commute playlists in 2007 when Shasha dropped “Lost And Found” — which even came with a triple commercial impact, compared to “Tell Freedom”.

Down from 2007 up to now, “Lost And Found’s” twin lead promo singles “Mataa Family” and “Buum-Buum Waa-Waa” generate a keen social buzz and command thump ups at almost every play everywhere. Like their co-album tracks, they exhibit authentic roots reggae elements that make the whole album a time-surviving masterpiece.

Shortly after the release of “Lost And Found”, a tough string of family commitments that would certainly conflict with Shasha’s music career activities set in and he then had to prioritize one over the other asap— as the smooth juggling of music and family seemed impossible on very personal terms for Shasha. His music career thus got a long pause, sitting untouched for ten solid years, while he focused firmly on family.

The years prior to Shasha’s long break from active music was a period well-spent. He got laced through several prominent concert deals. He widely toured Australia and beyond. He played in Columbia University (New York), Cross Roads Theatre (Marlene), Wild Hare Theatre (Chicago) and in other American States.

Denmark and Netherlands wouldn’t be Shasha’s final Euro-two, he further toured other parts of Europe too. He’s been to Africa’s West, North and East. Not forgetting Ghana, his home country.

Alongside the busy tour dates, own studio recording schedules and day job routines in the US, the multi-taskkng Shasha Marley yet made some time out to honour several feature requests from his genre colleagues who wanted his unique vocals guested on their projects.

“In 2001, I led a 15 top Ghanaian musician squad on a collaboration in the fight against HIV/AIDS in Africa. This was an advocacy song dubbed STOP AIDS, LOVE LIFE, under the corporate sponsorship by John Hopkins University in New York. A year after that, I joined hands with The Hall Of Fame Multi Grammy Award Winner, The late ISAAC HAYES, also on a collaboration, a song titled SAVE A MILLION LIVES, which was recorded in Los Angeles-California. This project was established to eliminate the HIV/AIDS Pandemic across the Globe through music”. Shasha Marley shares two of his huge collaboration feats.

On his return to active music, Shasha Marley is of the unwavering poise to give his rapt audience more great conscious reggae songs and several tours around the world after the international COVID ban on entertainment works is lifted.