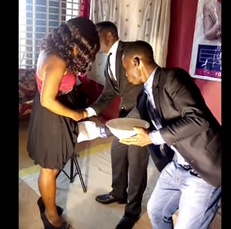 A disgusting video of an acclaimed prophet of God popped on the internet which has thrown almost everybody who watches it in bewilderment.

The video circulating on social media spotted by youngprs.com has the content of a “man of God” publicly shaving the pubic hair of both married and teenage female congregants of his church which has also been recorded by one of his member.

The supposed man of God whose name and church we are yet to identify, has said in the video that he has been directed by God to undergo the abominable act he conducted in the video.

However , he said he did it to cleanse them of their bondages but our culture and social media users seriously protests against it.

Watch the video below

Video : If Eno Barony Dares Beefing Me , I would reply – Euni Melo